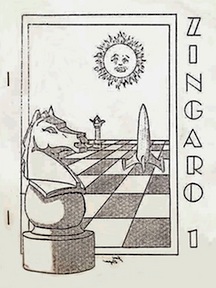 Zingaro was a science fiction fanzine published by Mark Irwin.

Released in Highland Park, Illinois, U.S.A., Zingaro appeared in the 1960s. It was an apazine, distributed through the Fantasy Amateur Press Association.

Issue 1 was published in June 1964. It featured a 3 page article by Ed Cox (Altair, Triton) entitled "Science Fiction and the Media". Letters were from Fritz Leiber, among others.

Issue 5 was released in September 1965. Skyrack #85, from December 1st, 1965, says, "Zingaro number 5 from Mark Irwin, Highland Park, Illinois, is also meaty and worth trying but at 35c (2/6d) is probably a little highly priced for the U.K. fan. Some very good Midwestcon photos here, however."

Issue 7 was published in March 1966 and featured Neil Ruzic's "The Case for Going to the Moon".