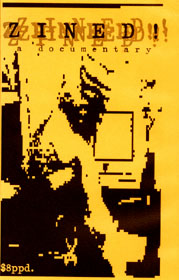 Zined! is a 28 minute documentary film about zines by Marc Moscato released on VHS in 1997.

The documentary explains what zines are and goes into the motivations behind self-publishing. It includes interviews with zinesters from Ape Fanzine, Free Fixins, Amy Greenan from Highest Population of Rock Stars (HPRS), Mykel Board from Maximum Rock 'N' Roll, Psycho Moto, Riverside Art Scene, Scott Treleaven from This Is The Salivation Army, and many more. The documentary delves into variety of styles and subject matter that the world of zines encompasses. The zinesters interviewed discuss issues like how to print a zine cheaply, networking, and the fundamental drive to publish zines.

Blinding Light Cinema described the movie upon it's release: "Zine aesthetics are dissected, the zine network examined and participants are grilled in Marc Moscato’s rapid fire and ultra low-budget look at an uncontrolled, uncompromising and unrestrained exchange of ideas and free press which seeks, among many other things, to subvert the popular aesthetic of glossy publications and to abuse other people’s (usually corporations’) photocopiers! This wide-ranging and aesthetically exploding documentary could very well be described as a film version of a fanzine, and herein lies its appeal."