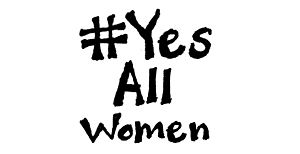 #YesAllWomen (2014) was a zine created by Chris Talbot-Heindl, in Stevens Point, Wisconsin.

The #YesAllWomen phenomenon showed the world how much sexism is still prevalent in our world and how much some people were out of touch of how much.

This zine is dedicated to some of the powerful stories and Tweets that men, women, and trans* individuals shared and some of the responses they received.

As a caution, while most of the responses were simply out-of-touch, some were violent and threatening. Some content might be upsetting to some readers.