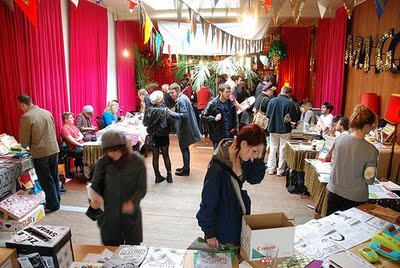 Wellington Zinefest 2010 once again took place at Mighty Mighty, this year on November 20 with more stall holders than ever before. Mighty Mighty's colorful surroundings (gold table cloths, red velvet drapes and carnival flags) suiting the idiosyncrasy of the zines on display. Wellington Public Library and their zine collection were again one of the prime sponsors but this year helped out by a grant from Wellington City Council's Creative Communities scheme. Intimate talks and workshops were held at the rear of the venue. A workshop table hummed with activity resulting in a gorgeous collection of montages being compiled in a zine-from-the-day. And finally, an ugly beautiful 'best of the fest' trophy was awarded to Hannah Salmon & Ben Knight for Daily Secretion 2.

An after party was held at another Wellington bar, Watusi, with several bands, all of which contained stall holders in their various line ups