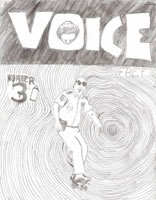 Voice Zine was a full-page hardcore punk fanzine done by Brandon Johnson. The zine was from a small south Florida city and had only lasted for about one year (August 2005-October 2006). During the zine's short lifespan it released two issues. Voice mostly consisted of articles by the creator and his friends, interviews, and reviews of hardcore punk records. The zine was mostly distributed throughout random parts of the U.S. but copies have made it to parts of Europe and South America. The final issue of the zine was delayed quite a few times from it's original schedule, although it had been completed sometime in September of 2006. Due to monitary and other issues, Voice #3 never saw the screen of a Kinko's xerox machine. The third issue contains a rare interview with the band Otophobia, quite a few years after they had broken up. The Master Copy is the only copy of the Voice #3.