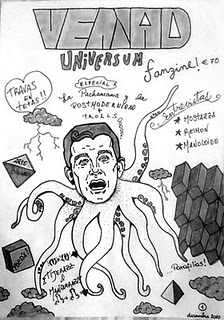 Vennad Universum (December 2010 - April 2011) was a fanzine from Argentina edited and published monthly by Agustina Quintana through her publishing house Vennad Soul Editions. Its title means Brothers of the Universe in Estonian, a language chosen randomly for the title.

Some sections are interviews conducted in a non-traditional manner with artists and musicians, but also with random people deemed interesting by the zinester. Other sections are devoted to sexual paraphilias, poetry and various writings, experimental cooking recipes, parody reviews of amateur short films, comics, and a humorous section called Heretic Pancakes which is about fake movie arguments. Besides these sections there have been random notes on various subjects like the Gauchito Gil, the Pachamama, and pseudoscience parodies.