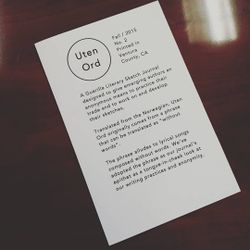 Uten Ord is a LitZine based in Ventura County, California, USA.

It was founded in June 2015 by Andrew D. O'Brien as a way to get feedback on shorts and vignettes that he and some colleagues had been working on. It's main concept is to write quickly and roughly. Submissions are accepted but published anonymously. This allows a blind voting system where readers can use a QR code to pick which they thought was the best work; regardless of the author.

Beginning in 2016, Uten Ord was able to publish internationally with subscribers in the Singapore and Tokyo, Japan areas.

Uten Ord's main goal is to allow emerging authors an anonymous means to practice their trade and to work on and develop their literary voice.

Translated from the Norwegian, Uten Ord originally comes from a German phrase, ohne worte, which can be translated as without words. The phrase alludes to lyrical songs composed without words. The zine adopted the phrase as the journal’s epithet as a tongue-in-cheek look at its writing practices and anonymity.

Past Issues explained the idea of a Literary Sketch Journal as a way of publishing ideas and practices for authors who are just trying to find their voice. One may think of it as a sketchbook, similar to what artists use to flesh out ideas for a larger work.

How does that relate to guerrilla? Well, that’s where the reader comes in. They don’t have subscriptions in the traditional sense where the journal can be found on the shelves of a magazine stand or your local bookstore. Instead, you never know where you may find a lone copy or two of Uten Ord. Could be your local coffee shop, library, barbershop, &c. And readers can even help in that regard. Once they finish, they can leave it on a table at their next stop. Who knows, this modest zine can make its way across borders and continents through reader contribution.