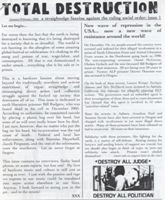 Cover of the first issue of Total Destruction.

Total Destruction is a "straightedge fanzine against the ruling social order" made in Lexington, KY. It features news articles, essays, interviews, and reviews. It has covered such topics as straightedge, communist theory, queer separatism, and animal liberation. In issue #4 the zine took a turn away from activism and politics and moved in a more 'nihilist' direction, reprinting 'The Impotence of Revolutionary Groups' by Sam Moss and discussing the writings of Monsieur Dupont. Total Destruction has been attacked on the Libcom internet forum (Libcom) and reviewed positively in several publications. The editor and creator is also the editor of a journal called Letters.

The inaugural issue featured essays on extremism, straightedge, and a overall review of Crimethinc publications.

The only half page issue. It featured interviews with Bonfire Madigan from the Icarus Project and (former) animal liberation prisoner Peter Young.

There is a general queer theme to this issue that features news items about inspiring crime, a critical essay about prisoner support, and an editorial from the editor of Out From the Shadows.

This issue featured columns from a variety of authors exclusively and carried the inverted Crimethinc slogan "the future is unwritten - expect failure". (Download PDF)