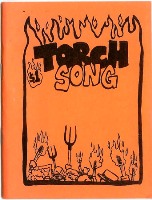 Torch Song is a minicomic from Chicago zinester Matt Fagan.

The unusually themed Torch Song is a glimpse into the story of a man who wants nothing more than to relax and enjoy the quiet moments of life. Unfortunately, everywhere he goes, the man is followed by a torch-wielding mob. Whether hiding from them in the park while wearing an unconvincing disguise, or reddening with embarrassment when the mob causes major disruption at the public library, the man just cannot seem to shake the unruly band of townspeople with their torches and garden tools. Where do they come from? Why are they so mad? And just what would happen if they ever caught him?