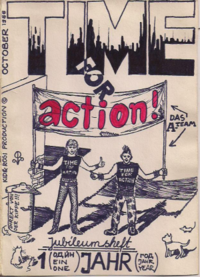 Time for action was a zine from Weimar, (East) Germany.

Time for action was a hand-made A6 zine. Manufactured by Kid & Rosi Production in Weimar (GDR), it was sent to Munich, copied and sent back to Weimar. Such was the Time for Action, one of the few punk zines out of GDR. It was available in small numbers on both sides of the wall.

At this time it was hardly possible to produce such a publication in East Germany, although there were many science fiction fanzines produced; also mailart was another thing that happened.

The small zine run for at least 19 issues (maybe more) and featured art and the culture of the 1980s, when it was created. On 4 to 8 pages it featured often humorous catoons, collages as well as reasonable/wise talk and blather.