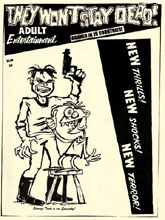 They Won't Stay Dead was a horror movie fanzine published by Brian Johnson out of Greenville, PA during the 1980s and 1990s.

The content included coverage of slasher and gore movies, but went beyond horror to cover trash culture, sleazy movies and other tidbits. Interestingly, the author didn't happily endorse everything about the B-movie scene. It was published in the 8½ × 11" format, generally over 40 pages, and published irregularly. They Won't Stay Dead was featured in The World of Zines.

"They Won't Stay Dead" became "Severe Cinema" in 2001, and then "Obscurerotica" later that year. The last two issues were the final issues Brian Johnson put out before his demise. Brian committed suicide on 3-21-02.