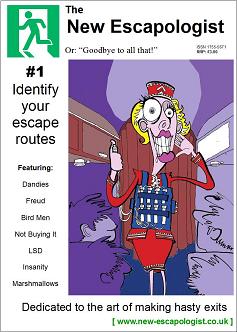 New Escapologist occasionally abbreviated to NE is a counterculture zine edited by Robert Wringham. It focuses upon solutions to the 'escape the rat race' problem and features critical items, essays, interviews and artwork.

"... it's a magazine about the desire to escape the various boring commitments that define modern life. The idea came about when [Wringham and his friends] began to notice a recurring theme amongst the conversations and artwork [their] peers. The desire to escape was always prevalent. Unfulfilled with the way things had worked out since leaving university and horribly unprepared for lives of pointless toil and boring relationships, we invented The New Escapologist: a platform for a more imaginative way of lamenting this problem and investigating the potential escape routes. "

The theory, practice and culture of escape, escapism and life over the fence are explored through investigations into art, psychology and philosophy. Through this exploration the zine reports upon a diverse range of subjects from Baudelaire and Augustus Leopold Egg to electronic poker and Doctor Who; from dandyism and radical postmodernism to TV sitcoms and train spotting.

While published in the UK, the zine has contributors from Europe, Canada and the Americas. It is distributed in several countries and is available to purchase at the zine's website, in certain shops and via selected distros. It was on display at the Free Hetherington Zine Fair in June 2011.