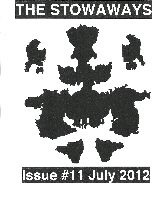 The Stowaways is a monthly fanzine published in Yorba Linda, California, U.S.A by Christopher Gordon.

The Stowaways focuses mostly on local music and the Southern California diy music scene. The first issue was published in September 2011, and it continues to put out new issues on a regular basis.

May 2012 Issue # 9: interview with Justin Conway of Tiny Lungs