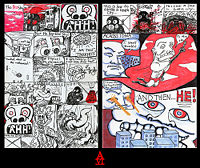 The Red Sky was an offshoot minicomic created by the same authors as Aorta VI.

It was released February 7, 2009 and was originally intended to be the first full-color release from Aorta VI but was instead printed in grayscale and was sold for $1.00 (though most copies were given away for promotional purposes.) The first (and currently only) printing run was limited to 20 copies.

The plot starts as a sort of post-apocalyptic horror story and switches gears to a comical Superhero parody featuring the reformed Santo Paul (from the Jared Blunk and Pj Kneisel comic The Mildly Retarded Altar Boy) and the delightfuly absurd villain He (created by Sam Graham.)