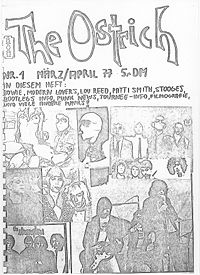 The Ostrich was the first German punk fanzine, edited by the musician Franz Bielmeier in Düsseldorf. The first issue appeared in March 1977 with fifty copies and it raised in two years up to 300 copies.

This zine was done in simple cut and paste design. It was written with a typewriter and the pictures were drawn or from the newspaper. The first issue features an interview with David Bowie taken from the US-Playboy.

Other collaborators were Peter Hein from the band Fehlfarben and Gabi Delgado from the German New Wave band DAF.