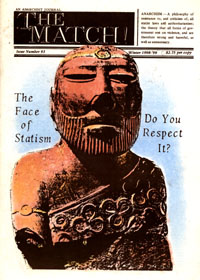 The Match is an anti-authoritarian Anarchist Journal by Fred Woodworth of Tuscon, Arizona.

Fred Woodworth has been publishing his anarchist journal "The Match" independently on his own printing press since 1969- over 30 years. Using the term "ethical anarchism" to describe his brand of anarchism, he rejects any anarchist behavior that resembles that of which anarchists oppose (violence, vandalism, etc.) His publication is strongly commited to anarchist and atheist ideals. His writing is known for being strong, some even feel it's overly aggresive.

Woodworth's regular columns ("Who the Police Beat", "Evil Empire Notes", "Crap Detector Compartment", among others) provide the readers with a new analysis and commentary on government, religion, police, technology, etc. every issue. He uses recent news from around the world to fuel his hatred of police, government, censorship, religion, or anything else that may be considered "authoritarian" (what anarchists believe describes anything opposite to freedom).

In the anarchist world, there has been a great deal of controversy over some of his views. For instance, Woodworth opposed the anti-WTO protests in Seattle; something most anarchists rejoiced over. He claimed they gave the movement a bad name with the use of violence and vandalism (and suggested the possibility of government agents being behind it), while others see his view as rigid and close-minded. Other examples: his opposition to the Unabomber, John Zerzan, and Noam Chomsky; three "media friendly" anarchists he believes the media covers to purposely portray anarchism as a violent, or "primitivist", movement.

Woodworth publishes his journal without the use of any computers or digital technology whatsoever, as he is adamantly against computers. He sometimes uses solar power to print "The Match" as well. Many disagree with Woodworth's unmoving stance on many things, but most respect him for his long history of work.

The Match was featured in volume three and volume nine of the Zine Yearbook.