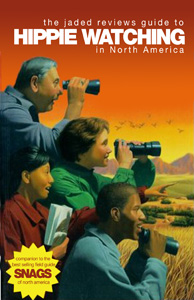 The Jaded Review is a sarcastic and satirical review zine focusing on the underground dance music, hippie, and new age culture.