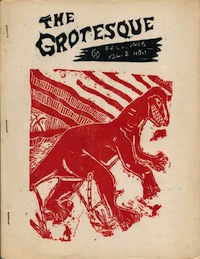 The Grotesque was a science fiction and fantasy fanzine.

Contributors of writing included "Science Non-Fiction in Fanzines" by Murray Leinster, which appeared in the January 1948 issue.

Other contributions from other issues include fan fiction by Harlan Ellison (Science Fantasy Bulletin), and an article by Bob Tucker (Le Zombie).

Letters came from Robert Bloch, among others.