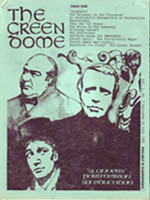 The Green Dome was a media science fiction fanzine by Diana Folch-Pi and Betsy Hatcher.

The Green Dome was subtitled "A Magazine for "Prisoner" Enthusiasts", and was devoted to the British television series The Prisoner. It was published in New York City, New York, U.S.A. in the 1980s.

The editors described their fanzine in the convention publication Spacecon 1980; "The Green Dome is a magazine for "Prisoner" enthusiasts. It contains news & discussion of this phenomenal TV series. Also included: LoC column called "Free for All", "Secret Agent" synopses, contests, artwork, fandom information and MORE. Of course, Patrick McGoohan, creator and star, remains in the lime-light. Published quarterly and available world-wide. Join us and perhaps this zine will prove as thought-provoking (or just plain provoking) as the show itself!"

The Green Dome included fiction, articles, questions for study, con reports and news, filk songs, letters, and an interview with Isaac Asimov was featured in issue 2 of March 1980.