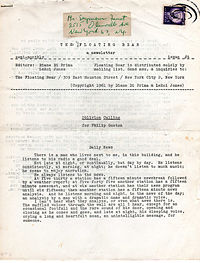 Published nearly every month and distributed by mailing list only, it was a fantastic platform for several schools of writing to come together, including the Beat writers, the New York School, Black Mountain and other revolutionary writers of that time. Later, after issue 28, when di Prima relocated to Topanga, CA, it featured some of the San Francisco Renaissance writers.

This weighty carrier of words held the works of Frank O’Hara, Michael McClure, Ed Dorn, Charles Olson, Joel Oppenheimer, Diane Levertov, Phillp Whalen, Jack Spicer, Allen Ginsberg, Robert Creeley, Robert Duncan, William S. Burroughs, John Wieners and both the editors, plus many more. It was never sold and supported by the editors and donations. The people who received copies were considered part of a literary and creative community, all of them kindred spirits. It was a great tool of the times as this mimeographed newsletter would reach a few hundred people every few weeks. So, if your work was showcased, it was read and quick. 37 issues were printed. The last issue printed as 'The Intrepid-Bear Issue' (Intrepid no 20/ Floating Bear no 38.) LeRoi Jones was arrested for homoerotic content of his play Dante's System of Hell in Issue 9. You can find a great deal about this publication in a few Diane di Prima’s novels and writings.