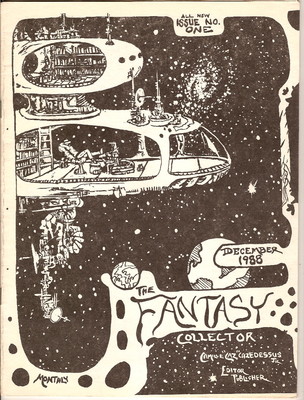 The Fantasy Collector was a science fiction, fantasy and pulp fanzine by Camille "Caz" Cazedessus, Jr.

Cazadessus had bought the title from George Bibby in 1968, and amalgamated it with his other fanzine ERB-dom in 1970. It was revived in 1988, and the first issue was published in December of that year.

The first issue of The Fantasy Collector featured a reprint of a pulp serial story by Fenton Ash titled "A Son of the Stars", which ran through sixteen issues. This was followed by the story "Dream's End" from A. Connell, and the serial "The Land of the Central Sun" by Park Winthrop, which ran in seven issues. Also featured were articles on pulp writers such as George Challis, H. R. Haggard, the Isaac Asimov history books, Argosy pulp artist Robert Graef, Ev. Bleiler’s SF: The Early Years, A.C. Doyle paperbacks, pulp fanzines, a Talbot Mundy book checklist, The Allan Quatermain Saga, and Bill Barnes.

Under the title The Fantasy Collector, the fanzine was published from December 1988 till March 1992. The title was changed as of July 1992 to The Fantastic Collector, which lasted till November 1996. In January 1997 it became Pulpdom. As Pulpdom, it ceased printed issues in October 2012 with #72.