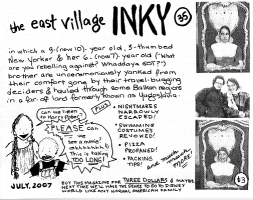 The East Village Inky is entirely hand written and illustrated by Ayun Halliday, and published in New York, U.S.A.

Halliday was the editor of The Zinester's Guide to NYC (Microcosm, 2010)

In addition, Ayun Halliday is the author of: The Big Rumpus No Touch Monkey! And Other Travel Lessons Learned Too Late Job Hopper Dirty Sugar Cookies Always Lots Of Heinies At The Zoo Peanut (forthcoming from Schwartz & Wade)

The East Village Inky was one of the zines featured on the 2003 and 2005 tours of North America by Mobilivre-Bookmobile, a traveling library in a trailer of independent publications. As well, the zine was featured in volume six and volume nine of Zine Yearbook, and in the books Below Critical Radar, Fanzines and DIY: The Rise Of Lo-Fi Culture, which features an interview with Ayun Halliday.