The Darkest of Shadows 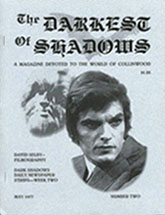 The Darkest of Shadows was a fanzine by Margaret Ann Droullard.

The Darkest of Shadows was devoted to the original television series, Dark Shadows. It was subtitled, "A Magazine Devoted to the World of Collinwood".

The first issue of this fanzine was published in February 1977, featuring Jonathan Frid as the character "Barnabas Collins" on the cover. It was 15 one-sided pages.

The second issue appeared in May 1977, and featured David Selby as the character "Quentin Collins" on the cover. It contained 23 one-sided pages.