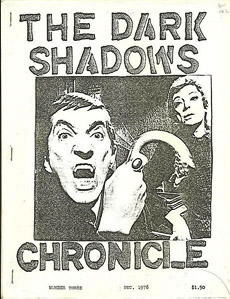 The Dark Shadows Chronicle was a fanzine by Mike Rupert.

The first issue appeared in June 1976. It was 32 pages and featured a Cast Index, and stage and film credits for cast members Jonathan Frid, Joan Bennett, Grayson Hall and Thayer David; a program summary; the lyrics to the song Quentin's Theme; plus a crossword puzzle, trivia and photos.

issue 2 was published in September 1976 and was 44 pages, with a review of the television broadcast of the film House of Dark Shadows; the Dark Shadows album, including lyrics to the song I, Barnabas, and submitted lyrics for the instrumental song Josette's Theme; the column "Hammer and Stake", with Dark Shadows news items; fan fiction "Curse of Dark Shadows" Part One; reviews of the Dark Shadows paperbacks; the article "Burnt Offerings - Dan Curtis Strikes Again", "The Crypt"; plus special surprise features.

Nine issues in all may have been released. Issue 6 was 34 pages, and issue 9, presumed to be the last, was 52 pages.