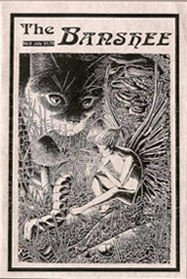 The Banshee was a literary zine published and edited by Rachel Fones.

Dedicated to short stories, illustrations, and poetry in the science fiction, fantasy and horror genres, The Banshee appeared in the 1990s. It was published in Croydon, Surrey, UK. Issue 3 was published April 1993, and issue 8 appeared in 1994.

Other items were by Jim Clifford, Barbara Johnson, Tony Lee, Anthony Phillips, and a comic strip by Derek Eames.

Also included was an interview with Peter G. Mackie, by Rachel Fones.