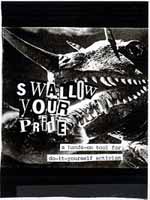 Swallow Your Pride is a zine published in New York City, NY, U.S.A. Three issues of this zine were released between 1998 and 2000, somewhat related to the Gay Shame events that happened in June of each year. The zine is subtitled "a queer hands-on tool for do-it-yourself activism."

"How's your gag reflex?" the editors ask in the introduction to issue two. The editors further state, "We are ashamed of Chelsea homogeneity, 'community' as a corporate target market, Giuliani in the 'pride' parade, foaming-at-the-mouth praise for anti-feminist 'pro-gay' beer advertising, and reactionary 'we're just like you' gays and lesbians who ally themselves with straight, racist conservatives."

Each issue was formatted differently. The first was digest sized. The second was long and slender (half-letter), and the third was 8.5 x 11. The third issue included an audio tape with the material being re-recorded onto used commercial audio tapes.