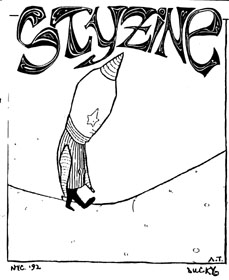 Sty Zine was first published in 1991 by icki (a.k.a. Mark Murrmann) and Matt Lingenfelter from Indianapolis, Indiana, both in high school at the time.

Initially, Sty was a skate zine, with standard zine fare -- except that it always read back to front. By the third issue, icki was the main writer and editor for Sty. Over the years, Sty developed its own style in both writing and design distinguishing it from the bulk of other personal zines on the scene in the 1990s. icki experimented with size and content, sometimes printing the zine on newspaper broadsheets and printing one issue that was 1/8 of an 8 1/2 x 11 sheet, sometimes recruiting other contributors and publishing a review supplement called Shoot the Stars. Action! Photozine also grew out of Sty Zine, and which continues to be sporadically published.

In 1996, icki did a split with Icky Apparatus from Nosedive. Issue 30 was completely written and published by Migraine's Ian Lynam. In 1999, Mimi Nguyen did a birthday issue (numbered 50) that featured parts of past issues and new contributions from icki's friends.