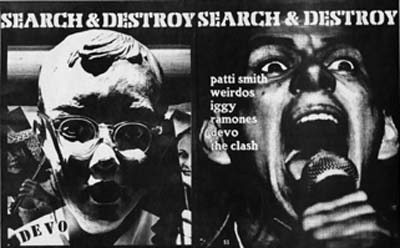 Search and Destroy was a San Francisco, California, U.S.A. punk zine published and edited by V. Vale, who went on to publish RE/Search (bound reprints of both titles are widely available).

The zine was published from 1977-1979 in a tabloid format and included interviews, photographs and cutting edge art. Search and Destroy was a minimalist document of the emerging punk youth rebellion, packed with an energy that leaped off it's pages. There were eleven issues published.

"I started working on Search and Destroy in January '77. Our approach was really minimalist, we felt that that was the new philosophy. It wasn't just going to be a documentation, it was going to be a catalyst. We felt that the music was the fun part but that it was an entire lifestyle, you don't spend your entire life playing music on a stage, so we gave book lists, we tried to encourage people to read, we listed films... I soon realized that Punk was total cultural revolt. It was a hardcore confrontation with the black side of history and culture, right-wing imagery, sexual taboos, a delving into it that had never been done before by any generation in such a thorough way."