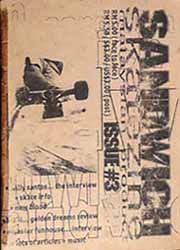 Sandwich Skatezine is a skateboarding zine from Malaysia that was published from 1997-1999 by Kuntai Crew. Kuntai Crew consisted of Pa'din, Fadzly and Lelixq. Pa'din is a household name and still one of the leading skateboarders from the country, who represented in many competitions overseas as well as locals.

During that period of time they managed to publish four issues. Each issue featured a letter section, local and international skate news, the skate scene, skate competitions and skate demo reports and skateboarding photos. It also features interviews with local and foreign skateboarders. The zine also had a strong propaganda against inline skaters. There were campaigns against inline skaters along with drawings, comics and listings in each issue.

They used the tag line "Why Eat When You Can Keep".

The skateboarders interviewed were:

The bands interviewed were

The crew went on to publish a glossy skate magazine called Revolution that were available at all news stands nationwide which marked the end of Sandwich Skatezine.