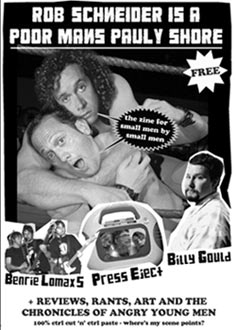 Although it has been raised in discussion, it is widely known that the author has no real interest in Rob Schneider or Pauley Shore, their films or their comparable acting abilities, and is a humorous saying created by the author with no particular deep insight.

Issue #1(April 2007), 32 pages, also referred to as "the epicenter of hatred and frustration" , the maiden issue contained:

The writing style of RSIAPMPS appears to be somewhat educated but amateurish at best. Whilst having a severe dislike to net and text writing styles, the author has a limited use of proper English grammar.