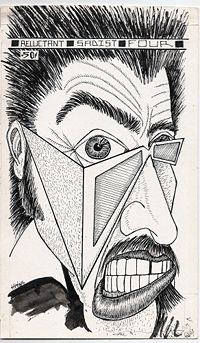 Reluctant Sadist was a digest-size alt comic book 'zine created by artist/writer Hal Weaver that was published on an irregular schedule from 1985 to 1989.

Eight issues were printed, including an "Omnibus edition" that collected the best work from the first three issues with additional material published in other 'zines. Reluctant Sadist typically featured weird, surreal and humorous artwork and stories mostly written and drawn by Hal Weaver, but there were a few outside contributors including Levy and Levi Rowland (artwork issue #2), John Verhulst (writing, issue #4), Brad Foster (writing/artwork, issue #5), and Michael Wingfield (writing, issue #7). Content of each issue is as follows;

- Eight pages. Front cover, full page illustration by Hal Weaver, "3-D Speed Freak". Pages one through six featured a multi-page comic book story by Hal Weaver called "Reality Doldrums" which introduced reoccurring characters "3-D Speed Freak" and his sidekick "Sam". This was the first part of a two part story that continues in issue #5. The back cover was a one page comic called "Gregor Samsa on the Dating Game" that was written by John Verhulst and illustrated by Hal Weaver.

- The first twelve-page issue that featured a full page illustration by Hal Weaver that was hand colored (limited to the first one hundred copies, signed and numbered). Pages one through ten continued the "Reality Doldrums" story, written and drawn by Hal Weaver, from issue #4. The back page was a one page comic written and illustrated by Brad Foster called "Starhead plunges into modern commerce".

- Twelve pages. Front cover, full page illustration by Hal Weaver, "The Dark Man Takes a Ride". Pages one through eleven featured the dark, surreal comic story "Night Vision", written and drawn by Hal Weaver. The characters of 3-D Speed Freak and Sam appear again. This comic was the basis for a short Super8 movie starring Colin Martin (played "Sam" and wrote/performed the soundtrack music) and Hal Weaver (wrote/directed/edited and acted in the role of "3-D Speed Freak") of the same name that can be found on YouTube.

The Omnibus edition of Reluctant Sadist that ran sixteen pages. The front cover was a new, full page illustration by Hal Weaver called, "Willard Scott". Page one was an introduction by Hal Weaver that is dated July 30, 1988. Pages two through five are a reprint of issue #1. Pages six and seven are reprints of the front and back pages from issue #2. Pages eight through fourteen are a reprinting of the issue #3, including the front cover and story "Artistic Delusion". The back cover was a new, one page comic written by Michael Wingfield and drawn by Hal Weaver called "Land of the Giant Blues".