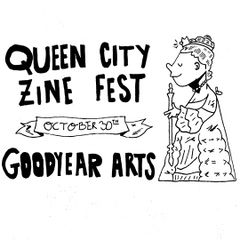 Queen City Zine Fest (QCZF) is an annual zine event held in Charlotte, North Carolina. It was founded in 2018.

Queen City Zine Fest celebrates self-published zines, comics, illustrations, chapbooks, small press editions, and other self-published printed matter. We desire to foster a community of independent publishers and those that are passionate about publishing. Our goal is to showcase DIY work and provide a platform for education and the exchange of ideas.

We are committed to organizing events that do not tolerate any form of discrimination or harassment including homophobia, racism, sexism, transphobia, ageism, xenophobia, ableism, etc. In addition, we strive to create a safer space for marginalized communities. All of our events are family friendly, free, and open to the public!

The second QCZF was held at Davidson College in Davidson, North Carolina on April 4, 2019.

The fourth QCZF was held at 742 North in Rock Hill, South Carolina on June 26, 2021. It was originally scheduled for March 28, 2020 at Central Piedmont Community College (CPCC) Harper Campus but was cancelled due to COVID-19.