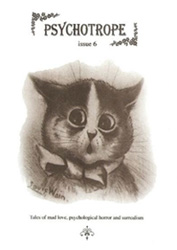 Psychotrope was a literary zine published by Mark Beech in Worcester, UK.

Nine issues of Psychotrope were released between the years of 1994 to 2001. Subtitled "Tales of mad love, psychological horror and surrealism", this zine was devoted to weird fiction and artwork.

A special features was the collaboration in #8 between Keith Brook, Lawrence Dyer and D.F. Lewis for the story "Fruit of the Flotsam".

Describing the cover of issue 6, the zine states, "The cover shows a detail of work by children's illustrator, cat lover and sometimes resident of Bethlem Mental Hospital, Louis Wann (1860-1939)".