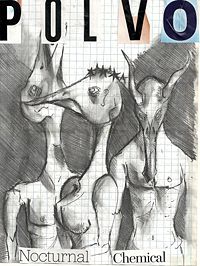 Polvo is a zine by Joseph Delgado out of Mohave Valley, Arizona.

It is the new name for the previously published zine Extinctions. Polvo continues as mainly an art and poetry zine with a focus on gay chicano cultural trends, some reviews, mail art calls, but mostly contains experimental poetry and art. There are no contributors to the zine, as the zine is made solely by Joseph Delgado.

Polvo is a new hybrid poetry, homoerotic, chicano arte literary zine produced in the same vernacular and vein of thought as Extinctions. Polvos mission is directly influenced by the lack of chicano, poetry, and experimental art zines in the zine world, Polvos primary mission is to attempt to fill that gap. Unlike Extinctions which was published every month, Polvo is a quarterly zine in hopes of giving the zine wide berth in being able to present highly polished experimental chicano poetry, homoerotic art, as well gathering a host of mail-art calls for the discerning readers pleasure.

OUT OF PRINT AS OF DECEMBER 2011 Joseph Delgado