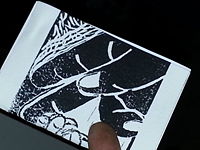 Pilcrow News is a perzine published by Henry a.k.a. Slavezombie in Southern California. This zine began as a webzine around 2002. Issues were produced sporadically until 2008, then forgotten for other interests and hobbies. Bizarre stories, concoctions, outlooks on life and opinionated mentions of music, film, poems and illustrations have always filled these pages. A total revamp of its design for a comeback issue in 2014 includes typeset copy in Royal Pica and IBM Selectric Courier reduced to 50%.

Henry writes screenplays in his spare time and this most recent issue of Pilcrow News was inspired through the need to produce typewritten copy on his portable manual typewriter. As an avid blogger, henry scans pages of scenes from his screenplay for his readers at Pilcrow_news and encourages other screenwriters to join the community of growing tloggers.

Issue #10, published April 2014: An outline with resourceful references to books, websites, music, etc. this perzine contains 16 pages of conviction, inspired by love, hate, conspiracy theory and the desire to help fellow screenwriters find their voice through fearless admission of writing from experience.

Issue #9, published October 2008: A Film Student's Resourcefulness in Appreciating the Classics, Rob Zombie Was a Cartoonist, A Halloween Murder Investigation and more.