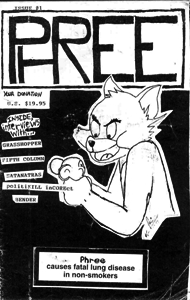 Phree was an independent music zine by Nick and Andrew from Toronto, Ontario, Canada.

Phree was released in the 1990's. Inside, the editors introduce their creation as "a little fanzine about music, life and Spike". Aside from the two editors, Chris is credited with creating the cover and helping out with art. It was a cut and paste, collaged, photocopied zine.

The cover of the zine announced that the cost of Phree was an unspecified donation, however the cost was $19.95 for those in the U.S.A.

The focus of the zine was on punk and indie music and featured lots of interviews with bands such as Grasshopper, Fifth Column, Satanatras, politiKILL inCOREct and Bender. Also included are reviews of recordings, live shows and zines such as Alternazone, Great God Pan, Locust, Steamboat Willy, Pumpkin Seed, and Slushy. Pop culture references such as The Archies are bizarrely juxtaposed throughout the zine with other comic characters, along with a centerfold of wrestler Jake "The Snake" Roberts. And the "Spike" referred to in the introduction is none other than "Spike" of DeGrassi High.