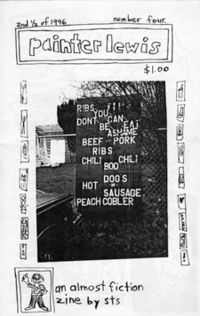 Painter Lewis is a zine by sts, published in Portland, Or., U.S.A.

On the front cover, sts describes the publication as "an almost fiction zine". The zine is comprised of many different stories, including several about the various jobs sts works at, such as substitute teacher, van driver, and a job in high school at Hot Dog On A Stick. As well, there are stories about relationships that end badly, tales of cacti phobias and skateboarding accidents, and quotes from notable children the editor has met at jobs, including one from 5-year-old Claire who tells sts that "You look like the queen of the H-word place", upon seeing her with newly bleached hair with reddish tips and orange and black nail polish. There are many illustrations and sts has also included mini comics of videos and movies she has made or hopes to make.

A number of issues of Painter Lewis were released in the 1990's by sts, who also released the zine Nightmare Girl.