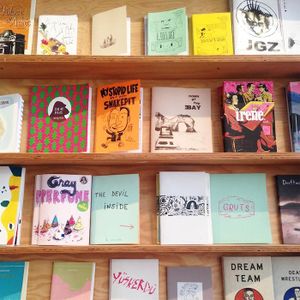 Zines on sale at Needles & Pens

Established in 2003 by Andrew Martin Scott and Breezy Culbertson, it defines itself as an arts space that showcases international and locally-made artist books, self-published zines, magazines, independent press, as well as, hand-made goods, jewelry, accessories; and visual artwork in a gallery setting.

According to its website, the mission of the space has been to create a dialogue between the artistic community and the general public of San Francisco by providing a venue in which artists can directly sell their creations – 50-60% of most items sold goes directly back to the artist that created it.