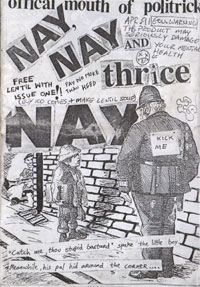 Nay Nay and Thrice Nay was a punk zine from Cork, Ireland.

Nay Nay and Thrice Nay was put together by Troll and Sandy who were both in the Cork band Violent Phobia. The first issue came out in 1991 with one free lentil ("buy 100 copies, make lentil soup"). This zine lasted about 5 issues, and consisted of mainly humour, but all in the anarcho side of things. The odd interview was included as well; the first issue featured the band Village Idiots, the second issue Chumbawamba. The zine also had competitions of winning homebrew.