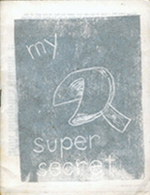 My Super Secret is a zine by Nikki McClure, published in Olympia, Washington, U.S.A..

Released in the early 1990's, My Super Secret is a two inch by four inch pocket size zine that was frequently passed around among Riot Grrrls, and was just as frequently written about in articles of the period. The often-quoted intro reads,

"During 1990-1991 a list of men who date-raped was kept on the wall of the 3rd stall, 2nd floor of the Library Building at Evergreen State College, Olympia, Washington. This is the story of what happened, or could have."

The story describes a world of secret messages passed from girl to girl, as each one navigates a terrain in which they are alternately invisible, constantly watched, or reduced to body parts, and are trying to become whole and integral again. All the while a dance is taking place. At the same time, the author is plotting a secret revolution that begins now, because, "we cannot wait for you any longer."