My Letter to the World 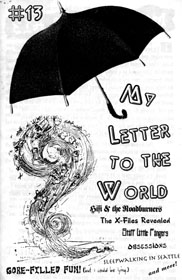 Issues generally focused on Lily's many obsessions and misadventures, interspersed with band interviews of such artists as Green Day, AFI, Rancid, Jawbreaker, and the Buzzcocks among others, as well as music reviews. Additional color was provided by guest contributors such as Optic Nerve's Adrian Tomine, AFI's Davey Havok, and Jawbreaker's Blake Schwarzenbach, who detailed his band's then-infamous tour with Nirvana. Travelogues to places like New Orleans, Taiwan, and the Pacific Northwest were common; she even went so far as to create a personalized travel guide to London that spanned several issues (this travel guide was reprinted in the second issue of Zine Yearbook).