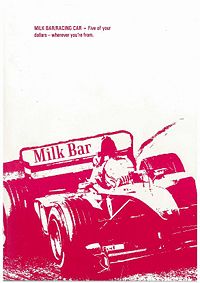 Milk bar (1998?-1999?) was a comic, zine and literary review zine edited by Amber Carvan and Richard Vogt and published in North Fitzroy, Victoria.

Carvan has described Milk bar variously as: "an intelligent and professional journal that would treat the Australian zine scene as a movement and discuss it critically" and "an Australian journal that focuses on the efforts of those involved in small press".

Only two issues of Milk bar were published, Carvan has described the reason for this in part due to criticism by some who perceived Milk bar as an 'attempt to mainstream zines' and who saw the critical review of zines as 'too confronting'.