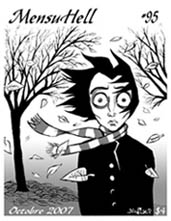 MensuHell was published in Montreal, Quebec, Canada. It was created by Steve Requin who first released in 1995. It had originally been titled Requin Roll Presente but the name was changed to MensuHell in 2000, after which it was published monthly until 2008. 109 issues appeared in total.

MensuHell featured serialized comics, historical articles, short stories, and stand-alone cartoons, and included work by everyone from never before published writers and artists to established professionals and writers about comics.