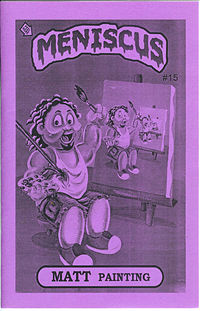 These first three digest-size issues were published in Portland, Oregon during the spring and summer of 1998, prior to Matt Fagan's move to Chicago, where he pursued a master's degree in writing. The fourth and fifth issues were assembled during his first year of graduate school, and were expanded to a larger magazine-size format. Issue four celebrated the size change with the cover announcement "Great Big Giant Supra-Terrific Party-Size Mega Issue of Fantasy!" and the slogan An Entertainment That Kisses Right on the Mouth! The fifth issue (An Entertainment Eschewed by the Elite and the Everyman) continued the larger format, but issue six (and all subsequent issues as well) returned to the digest size.

The real turning point for the zine came with issue eight, An Entertainment Desperately Trying to Convince Itself of Its Own Existence. Firmly planted in perzine territory, the sad, emotionally heavy entry bore little resemblance to the Portland issues of Meniscus, and while later issues have seen a much more lighthearted mingling of fact and fiction, the entity as a whole has never returned exclusively to its humor-oriented roots.

Issue Nine: An Entertainment that Swims Upstream in Circles

Issue Eleven: An Entertainment with One Foot in the Grave and the Other in Its Mouth

Issue Twelve: An Entertainment Up With Which We Shall Not Put

Issue Thirteen: An Entertainment that Said to the Universe...

Issue Fourteen: An Entertainment With No Regard for the Consequences

Issue Sixteen: An Entertainment for the Bleak and Insufferable