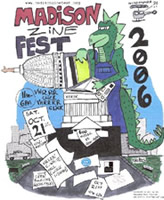 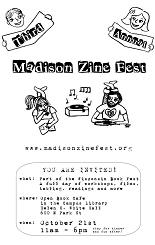 The Madison Zine Fest (MZF) is an annual zine event held at the University of Wisconsin, Madison in conjunction with the Wisconsin Book Festival.

MZF's mission is to expand networks of zine communities and, at the same time, increase individual and institutional awareness of zines. It encourages the creation of independent media and alternative publishing. Ultimately, the MZF celebrates self-expression and freedom of speech, while it brings together people who appreciate the medium of zines and want to share work and ideas.

MZF involves local and national zine creators, readers, researchers, and other experts who educate, inform, and draw others into the zine scene. MZF creates increased communication and builds community between many different producers of independent media. The fest helps people to share skills and information related to zines and zine culture. Through hands-on, discussion-based events, the fest includes: workshops, panel discussions, a zine fair, and zine readings. Admission to the fest is free and open to the public.