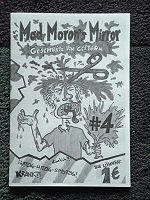 Mad Moron's Mirror is a 'satirical egozine' from Constance (Lake Constance) in Germany. You can get it at concerts and festivals mainly in southern Germany (on occasion, it is available from the travelling zine-crew directly, at their latest location) or from the author himself.

Mad Moron's Mirror contains small stories, cartoons, political articles and funny theories. Everything that the author thinks about, such as jokes about the scene, daily life, his generation and other people, the authors themselves, politics and last but not least, sick stuff, is included. Though the zine comes out of the punk scene, it doesn't deal with music, there are no interviews or LP reviews or concert reports, it's purely literary.

Form: Din A5, black/white copied, about 40 pages. The layout is a classical DIY cut and paste layout, sometimes painted, and the cover is drawn by the author.

Release: unsteady, around two issues a year, until now there have been released 4 issues. #4, the current one, has been released in July 2007. The cost is 1 €.