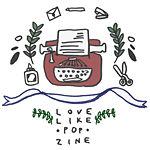 Love Like Pop' is a perzine by Rachael, from Perth, Australia.

First published in 2001, the contents include musings on art & culture, feminism, librarianship, being Australian & Chinese, with a cut and paste layout.

Love Like Pop #3 was featured in the book 'Intimate Ephemera: Reading Young Lives in Australian Zine Culture' by Anna Poletti.