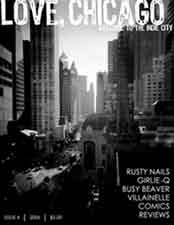 Love, Chicago was self-published as an 8.5-by-11-inch black and white zine in the winter of 2004 to spotlight Chicago's DIY/indie scene from bands and burlesque performers to ugly doll crafters and tattoo artists.

Love, Chicago profiled independent artists, businesspeople and events. In addition to features, the zine dedicated a reviews section to the work of bands, filmmakers, restaurants, websites and zines.

• "The writers obviously care about their pieces, so a lot is invested in their quality. And there’s something very Chicago about that." –Punk Planet, No. 70

• "Love, Chicago covers a niche overlooked by publications such as the Reader and TimeOut Chicago." –Illinois Entertainer , November 2005.

• "Challenging the cliche that all art comes from the coasts, the second issue of Love, Chicago picks up where the first left off in showcasing the Windy City’s vibrant independent scene." –Venus Zine (online)

• "This black-and-white zine is as close as you can get to a magazine without being shunned by do-it-yourselfers." –UR Chicago

• "Articles and stories would be of interest to any audience, but for Chicago residents its especially fun to read, as you will most likely find a name or place in here that you are already familiar with." –Loop Distro (online)

Founder/co-publisher and editorial director Erica Burke began publishing zines when she was a freshman in j-school around 1997. "The first zine I ever saw was from a guy my friend worked with at the local record store," Burke said. "It was laying on the floor in her bathroom. It was all tongue-in-cheek dude-bro stuff and some record reviews. I was like, wow. I need to be doing this."

Her M.O. was to take what she learned through journalism classes and writing for the school newspaper – and later in the corporate publishing world – and apply it to her DIY zine projects "So I could write what my friends and I wanted to read about, but do so in a more organized fashion that included bringing on contributors, developing distro and even pursuing ad revenue. Not that the revenue ever poured in, but at least we sort of looked like we were quasi-legit."

Hush Kitty Nos. 1 and 2, which she cut, pasted and photocopied using her college employer's machine, paper and staples, were given away for free at school. "'2011: The Revenge of Print' is this challenge for old zinesters to print 'the next issue' that never was," she said. "So there will be a third issue of 'Hush Kitty' in 2011 featuring old and new contributors."

Love, Chicago, which she founded in 2004, was inspired by living in a city bursting at the seams with creatives. "I was freelancing for Venus Zine, Punk Planet and Innerview a lot during that time and covering a boatload of local bands and artists," she said. "I finally felt comfortable enough in my abilities to manage a magazine and had enough contacts in the zine/music/art world to launch sort of a love letter from the city that basically big upped the artist community," Burke said. "I learned so much. I met so many amazing people – lifelong friends, really. I cherish that time in my life."

After five exciting years, it fizzled out in 2009 after her move out of Chicago, a new job and motherhood. "You can't run a Chicago zine at your house 50 miles from the city – I wasn't about to call it in," Burke said. "I wasn't heartbroken. Love, Chicago ran its course. We ended it with a bang at Reggie's. Meanwhile, I became a mom, which is like the coolest gig in the world and incredibly inspirational."

Today, Burke manages a niche magazine in the northwest suburbs, runs Mommy's Alright – an alternative mom blog, and in addition to taking on the Revenge of Print challenge in 2011, plans on publishing children's books with her illustrator husband and running zine workshops for teens in the burbs. "I think kids today – particularly teen girls and LGBT kids – need access to zines and the encouragement to create their own. Zines are a safe place to get their voices heard, their art seen and feelings validated."