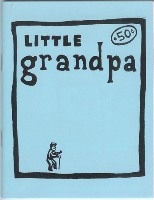 Little Grandpa is a minicomic by Matt Fagan of Chicago, Illinois, U.S.A.

The entire book was made over a weekend in March of 2002, after the death of Matt's grandfather, General James Pound. Matt was raised by the man that everyone called "Papa", and his passing - while of no surprise to anyone - was a sad moment that he wanted to mark by celebrating Papa's life.

An uneducated southerner from humble means, Papa knew that his children and grandchildren had grown up to be nothing like him, but he loved his family. All he wanted for them was for each and every one to be happy and go after what they desired. Little Grandpa is a tiny little fairy tale about a miniature grandpa whose life never outgrows its small container, and who encourages his grandson to grow up and seize the day... but never to forget who you are or where you came from.

Little Grandpa is a very short brush-and-ink comic that is guaranteed to make you cry, but not in a bad way.