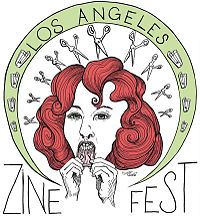 L.A. Zine Fest is an an annual celebration of zines, comics, and self-publishing, as well as a series of events and workshops held at different venues in the greater Los Angeles area.

The 2014 event will be held at Helms Bakery in Culver City. (Exact date to be announced.)

The 2013 event was held Sunday, February 17th at The Ukrainian Cultural Center in Hollywood, California.

The 2012 event was held Sunday, February 19th at The Last Bookstore in downtown Los Angeles.